A record-breaking Focus Booth for the Australian Victorian Auditor General

The Victorian Auditor General’s office (VAGO) undertook a move just three floors up from its previous office, and saw opportunity for a fresh start. As the organisation had grown and changed over the years, it needed an updated space that reflected its current values and positioning. To help with this, interior designer NEXUS Designs was enlisted to create a space that was transparent and open; a space that encouraged communication and brought everyone together to be part of the team.

The Victorian Auditor General himself leads the change

The first step in achieving this was taking the Victorian Auditor General himself out of his closed-off officeand into the main workspace.“The old fitout featureda lot of enclosed offices, with the most senior staff members behind secure receptions, with their own private receptionist essentially guarding their office,”says Sonia Simpfendorfer of NEXUS Designs. The new fitout, however, positions the Auditor General in themost central area of the workspace, in a glass office with a mammoth sliding door, which is left open most of the time, inviting employees in.

“He is no longer locked away doing his tasks in a corner; he’s part of the team. He sits in the tea room with people and he is available and accessible visually, at the very least, at all times. And that was the feeling he wanted to have throughout the whole organisation for everybody. So we looked at how to do that organisation-wide with the visible support the philosophical elements to approach that he brought to the space,” Simpfendorfer explains.

Creating privacy with the first ever triple-pod Focus Booth

The remainder of employees work at desks around the glass office, with auditors on the top level of the two-storey space and support workers on the bottom. Managers who were previously in offices, were brought out into the open too.“The problem we faced with this, however, was that when you’ve had an office for so long and you’re used to being able to go in and have a quiet, private workspace, and then you hear that you’re losing your office, your biggest fear is that you’ll lose your acoustic separation or your ability to do confidential work,” Simpfendorfer says.“The other thing is that an office allows you to call people in and sit to conduct meetings.

The new fitout brief called for everyone who led a team to be with their team in the open plan, however they still had to be able to function and do everything that they were able to do before. So we had to find a way to make that happen and help the management level feel comfortable moving out of their offices.”

Working together with Schiavello, NEXUS Designs came up with sketches for a triple-pod booth – an extended, customised version of Schiavello’s Focus Booth. The triple-pod Focus Booth is a single, weaving partition panel with a manager’s desk space on each end, and a built-in sofa in the middle. This allows managers to be out in the open and part of their team, however still retain some degree of privacy and acoustic boundaries thanks to the booth’s high, curved panels. Generous in size, the workstation ends of the booths house a workspace and pedestal. Meanwhile, if one of the managers needs to have a meeting, they can use the sofa space on the other side. The custom solution creates a middle ground between a closed-in office meeting space and being completely out in the open.

“The managers now don’t have to make a big deal of pulling someone into their office or walking out of their office to see someone; you’re all there together, but with enough separation that you can still easily complete tasks that require privacy and focus. That’s why I love the Focus product, because it gives you an acoustic barrier and a level of privacy, but it’s not a complete barrier. Someone can still pop over the top and say hello,” Simpfendorfer says.

Bringing an idea to life

“We saw the Schiavello Focus Booth when we were at the Melbourne showroom, and we loved the detailing of it and the thickness of it – the proportions of it were really fantastic…” she continues. “But we knew we needed it to be bigger. I did a sketch of a triple pod and I showed Schiavello and they instantly said, ‘Of course, we can do that. The process of getting the booths customised and produced was smooth and really fast. It was completed within a couple of months. We really wanted a certain finesse to the panels along with a lot of ducting, which Schiavello was able to accommodate perfectly. They were also able to powder coat everything to match our palette which was a bonus.”

Since the new workspace has been in place, productivity and connectedness between the leaders and their teams has significantly improved. As Simpfendorfer explains, “We wanted to create an interior that would last both in terms of lifespan and visual trends, and the result has been even better than was anticipated. The booths have definitely worked as intended. When you try something new, there is no complete guarantee that it will work. But the Auditor General models the behaviour he wants from the staff, so there has been a fantastic flow between the idea and the end users understanding it and utilising it, which has made it a seamless transition.” 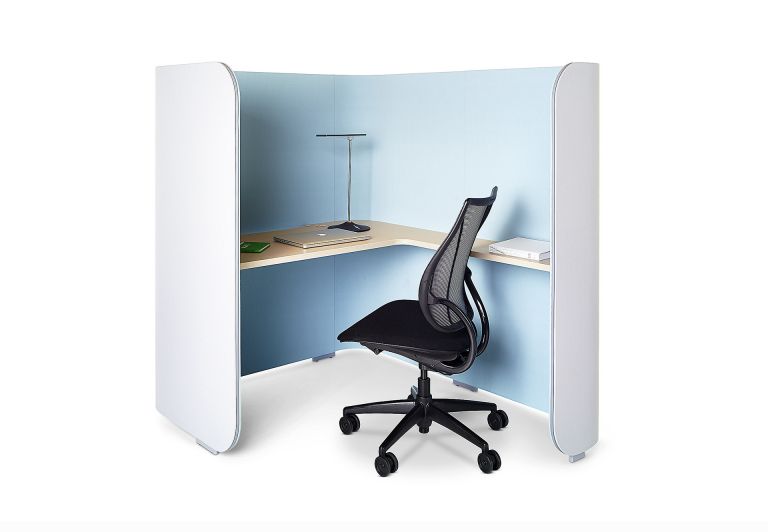 Designed for concentration, Focus Booth is a stylish, audio and visual buffer for privacy during solo work in open place offices, universities and schools.